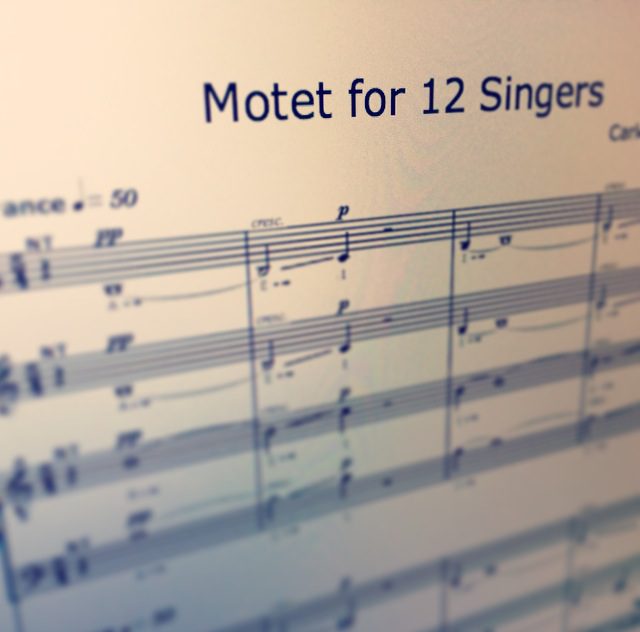 “Neither is it asserted that all (the elements) are real, nor are they all realities; Because there is existence, and also non-existence, and (again) existence: This is the Middle Path!”
-Maitreya (C. 270-350 AD)

The concept of the Middle Path (the vision of reality in its true form) is a fundamental tenet of Buddhism. The premise behind the composition originated from this verse. It is that of an entranced group of Tibetan monks, calling out for the spirits to descend upon them. As the spirits descend they are offered a chant which defines the group’s faith and strong conviction. Once satisfied, the thirteen spirits rise to the air one by one. The spirits suddenly dissappear as the last one rises, leaving the group in an enlightened, entranced state

After doing research into the religious practice itself, the most important text I came upon were the Five Sacred Syllables. In Buddhist practice, these were hidden in the text of a chant. A sacred syllable such as HUM would be preceded and followed by alterations of itself (IE: LEM-HEM-HUM-HOM-LOM). This was their way of keeping young apprentices and outsiders from understanding the meaning of their prayers. I presented all five syllables (Bhyo-Hum-Om-Hsi-Kye) simultaneously, and used them as percussive elements throughout the work.

The text I used for the chant was derived from the Tibetan dialect used to describe (not worship) the Stupa. It is the Buddhist symbol of illumination. Analogous to the Christian cross, the text used is simply a description of the individual components of this object (IE: If it were Christian text it would read: Nails, Wood, etc.)

The beauty of the text lies in its percussive quality, hence enhancing the “raw” sound of the choir.

The “Motet” is a tribute to the Tibetan Chant and the practice of Buddhism, as well as an objective essay on the range and dynamic beauty of their music.